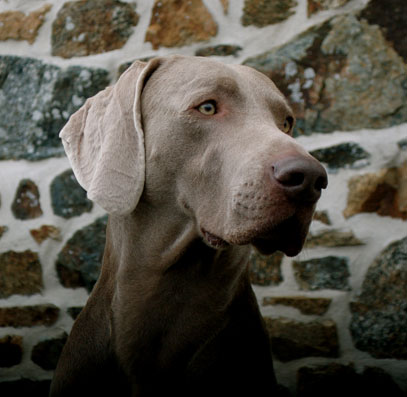 Phoenix ðr en hðrlig hane! Vi lðrde kðnna denna hund redan som ung och har f—ljt honom sedan dess. Han har varit hemma hos oss och finner sig mycket vðl bland vÍra flickor, likasÍ har vi lðrt kðnna honom hemma hos sig i Frankrike. Han ðr en mycket sk—n personlighet. Tack Marie, f—r att vi fÍr m—jlighet att anvðnda din —gonsten! "We are over the moon!"
Phoenix is a lovely male! We learned to know this dog already as a youngster and have followed him since. He has visited our place and we find him very relaxed among our pack, as well as we have met him at home in France. He has a very nice personality. Thanks, Marie, for letting us use your precious gem! We are over the moon! 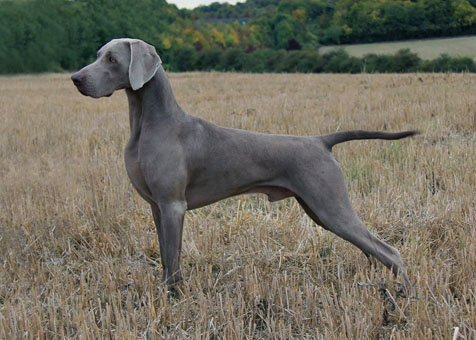 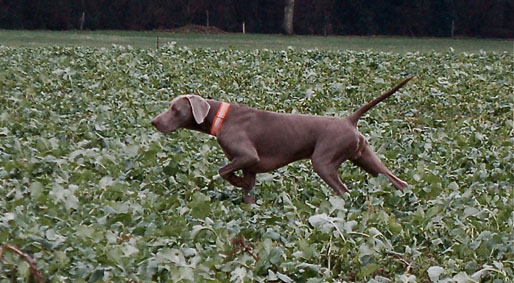 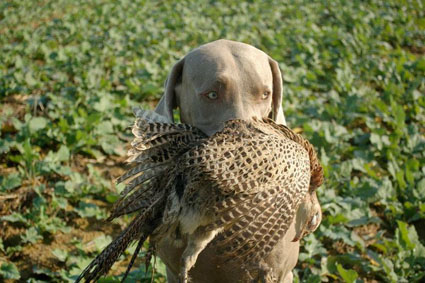 MarieÇs own words about PHOENIX:
PHOENIX is a young dog highly promissing, his terrific pedigree speaks for himself ! His Dam is just the only weimaraner SH DOUBLE WORLD WINNER on earth : WW'09 & '11 Multi CH FT merited LE CINQUIàME èLèMENT At Sberweiss Fala Love'A "LEELOO" and his Sire is certainly one of the best producer ever BIS/BISS AUST GR CH/AM/CAN CH Graytsky's SMOKIN'IN HAVANA "MAC".
PHOENIX is at the ideal size of the standard. Strong boned, structured and really masculine, Phoenix stays elegant with a noble attitude. His character is very exceptional : stable in mind, friendly and self-confident. Phoenix has a huge "will to please attitude" which makes him very interesting to work with ! Phoenix is very serious at work. In the fields, he is a bird finder thanks to his very strong nose. His great self-controle is one of his numerous qualities. He is a very nice retriever on order on earth and in water, one of his favorite element. This water passion is inherited from his famous mum, Leeloo for sure.
Phoenix is 67 cm and 38 kg.
HD A/A, Elbows : 0/0 and Eyes tested and clear.
Complete teeth, scissor bite. DNA stored.

★ WORK :
He passed and succeeded at the TAN exam last year at the age of 9,5 Months old with great comments from the 2 judges.
He passed the confirmation exam with an expert of the breed. This exam allow him to be used in breeding.
PHOENIX participated recently to his very first Autumn Field-Trial season, he has been placed at 4 FT on the 5 he participated. He even did the exploit of winning a wonderful 2nd place awarded by a RCACT in Open Breed and the day after he won the FT he was presented with the EXCELLENT mark and became that day : TRIALER !!! Useless to say this dog is amazing and we are so proud of him !
✪ TAN at 9,5 months old
✪ 1RST Choice Stud at 15 Months old (TAN + EXC mark in conformation + Passed the confirmation under expert of the breed + HD accepted by the Weim club)
✪ MAIRY/MARNE : 1RST Participation to a Autumn FT Inter-Club Open to 8 breeds : Placed 4TH VG over 18 dogs (Only 6 dogs were placed that day !)
✪ ANDECHY Inter-Club Open to 8 breeds : Phoenix again placed and at 4TH VG. Phoenix confirms he has his place in FT :-)
✪ ROSEL Open Breeds : PHOENIX did the exploit beeing placed 2nd EXC + the highly great RCACT ! Fantastic !!!! Phoenix becomes that day EXC 3 Stud !
✪ CAEN : Phoenix confirms his result of the day before and wins the FT with 1RST EXC and his WINNER OF CHALLENGE URUS awarding the BEST DOG OF THE DAY ! Phoenix becomes TRIALER that day !!! :-D